On the shores of the Mediterranean Sea is Pacha BCN, one of the busiest places in the Olympic Port. Every year some of the most sought-after DJs on the current music scene land here, such as Claptone, Robbie Rivera and Bob Sinclar, among others. The Pacha nightclub is a great option for partying!

Plane of VIP Tables in Pacha 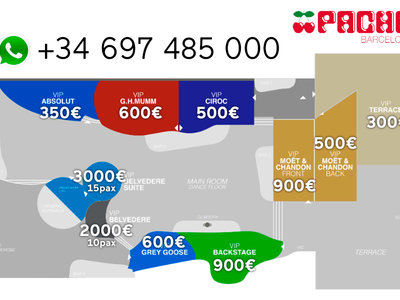 Pacha Barcelona offers you a wide variety of drinks to consume in its VIP area . We show them below along with their final price . Discover the price of the VIP table at Pacha Barcelona and the bottles you can buy. 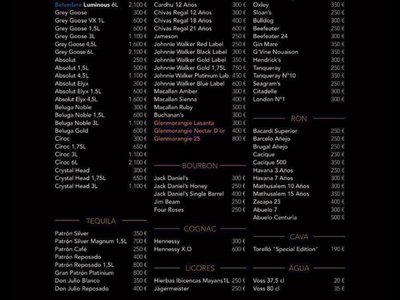 Wanting to resemble its older sister, Pacha Barcelona, ​​the headquarters in the city of Pacha Ibiza, celebrates the parties known as Flower Power, one of the best known in the local. The best tables at Pacha Barcelona.

In addition to this, there is an event every night of the year and it is important to be arranged. The dress code requires going to the height of a place of these characteristics, choose your best clothing to go to Pacha Club Barcelona, ​​join our list and win for sure!

Conditions and prices of tables at Pacha Barcelona:

How to pay your table at Pacha Barcelona?

• Lista Isaac offers the VIP table reservation service   free of additional charges.
• It is not necessary to pay in advance to reserve the tables. Except for special DJ's and New Year's Eve.

What should I do when I get to the Pacha Barcelona disco?

• Upon arrival, say you have a VIP table reservation in your name.
• There is no need to queue.
• Remember, if you have any questions, do not hesitate to visit our website or contact us via Whatsapp

The Pacha Barcelona disco is the favorite of young university students for their parties. Every night the disco is full of groups of friends who come to be part of the party by signing you up on the Pacha guest list. This way they can live the experience for free without having to pay a euro for their entry, there are no more excuses for not having a great time! Get your private table at Pacha Barcelona at the best price.

We will inform you without obligation and we will reserve your table at no additional cost. You have three options to contact us by phone +34 679 59 77 23.

or by email to vip@youbarcelona.com